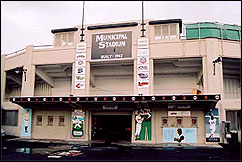 SAN JOSE, CA (CelebrityAccess MediaWire) – Despite being on the losing end of a labor dispute against an out-of-town production company that put on a Brian Adams and Def Leppard concert at San Jose’s Municipal Stadium, leaders of the local International Alliance of Theatrical Stage Employees union were satisfied that their message was heard.

Members of the union were first angered when Chicago-based promoter JAM Productions hired non-union stagehands from a nearby town instead of the local union workers.

“We brought visibility to our cause and to the plight of the working family in Santa Clara Valley,” David Levinson, secretary of Local 134, told the Mercury News just before the June 3 concert began.

Promoter Jerry Mickelson of JAM Productions told the paper a day before the concert that the union was “strong-arming” him and wanted to charge “four or five times” what he should pay.

The union began picketing the concert on Thursday after attempts to come to an agreement fell through. Throughout the day on Friday, about 40 picketers stood outside the stadium holding signs and handing out fliers.

The stadium has no contract requiring them to use the union labor, but union officials say it is unfair to local promoters who hire union labor at other venues. –by CelebrityAccess Staff Writers