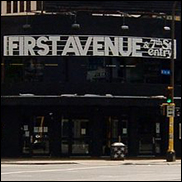 According to the Minneapolis Star-Tribune, the band Theory Of A Deadman was performing their headlining set at the venue at about 10 p.m., when a 30-foot-by-30-foot section of the ceiling gave way, damaging water pipes and dropping debris onto the dance floor and DJ booth towards the rear of the venue.

“A large portion of the ceiling fell and took out water pipes with it,” Nate Kranz, First Avenue general manager told the Star-Tribune. “We have no idea why or how it happened. We won’t know anything about this until tomorrow. It was a terrible surprise.”

About 1,000 patrons were evacuated from the venue and 3 people were transported to area hospitals via ambulance for injuries that were reported to be minor.

A spokesperson for the club said via Twitter that First Avenue, and its performance spaces including Entry, Record Room, & The Depot, would be closed for at least two days while structural engineers evaluate the cause of the collapsed roof and the safety of the building.