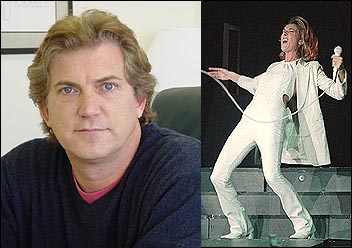 Concerts West is releasing two additional months of tickets for August and September performances of A New Day … featuring Celine Dion, created by DRAGONE and presented by Chrysler. Tickets go on sale March 26 at 9AM PST. A New Day … premieres on March 25 at The Colosseum at Caesars Palace in Las Vegas.

"We were thrilled with the demand for tickets for the first block of performances," said John Meglen, co-CEO of Concerts West. "At this point, March, April and May shows are basically sold out with only a few single seats left. With seats available for July performances and the new on-sale for August and September, Celine Dion fans and Vegas visitors can plan their summer vacations around seeing this unprecedented show."

LAS VEGAS (AP) — Celine Dion took the stage Tuesday night at Caesars Palace in the debut of "A New Day," a multimillion-dollar extravaganza that will test the French-Canadian superstar's staying power.

The diva belted out 20 tunes in 100 minutes in front of an adoring crowd at the 4,100-seat Colosseum. The audience couldn't get enough.

"We love you Celine," they shouted, and gave her a series of standing ovations.

"Tonight is the big day," Dion told the audience. "I want to thank you for being here … with everything that is going on in the world, let's just try tonight to focus on peace. Let's try to enjoy ourselves tonight."

Dion, who turns 35 Sunday, danced and flew from steel wires throughout the night. But the fans were there to hear her voice and got plenty of it.

She sang such classics as "Fever," "At Last" and "I've Got the World on a String." There was no encore.

Under her contract, Dion is expected to keep up the act five nights a week, 40 weeks a year until 2006. She will receive about $100 million, plus 50 percent of the profits during the three-year contract.

Tickets, which cost $87.50 to $200, have been selling steadily. More than 250,000 were sold for the first three months of the show. Another block of tickets was to go on sale Wednesday.

To ensure that Dion can belt out tunes for 200 shows a year, a stage humidifier was installed to protect her voice, which is insured, from the desert climate.

Dion's debut coincides with the release of her new album and a live CBS special hosted by Justin Timberlake.

The casino, along with parent company Park Place Entertainment, is hoping that Dion can reverse its sagging financial fortunes. Dragone also created the Cirque du Soleil shows, including the long-running "Mystere" and "O."

LOS ANGELES (AP) — Celine Dion was supposed to get a star on the Hollywood Walk of Fame Friday, but asked to have the ceremony postponed because of the war with Iraq.

"I do not feel it is appropriate at this time to celebrate this milestone in my career when we are on the brink of war," the Canadian singer said in a statement Wednesday. U.S. forces launched their war against Saddam Hussein later that night.

"My thoughts and prayers are with the men, women and children who are involved in this at home and overseas."

Dion, 34, is scheduled to open next week at Caesars Palace hotel-casino in Las Vegas for a three-year concert engagement.