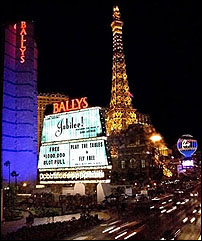 (CelebrityAccess News Service) – Clear Channel Entertainment has been tapped by the city of Las Vegas to help it throw a 100th birthday bash on par with "The Super Bowl, The Academy Awards and The Olympics." CCE will produce the Centennial events and experiences, sell integrated sponsorship packages, handle merchandising and licensing and develop Centennial-related television broadcast rights and opportunities.

"Las Vegas is like no other city in the world and when we commemorate our birthday it will be a blockbuster," said Oscar Goodman, Mayor of Las Vegas. "Through our promotional venture with Clear Channel Entertainment, we will host a birthday party that's bigger and brighter than the neon lights on the Las Vegas Strip!"

As part of Las Vegas' overall branding efforts, the city and Clear Channel Entertainment will work closely with the Las Vegas Convention and Visitors' Authority (LVCVA) to entice visitors to participate in the festivities, while also providing unique and exciting sponsorship, marketing and merchandising opportunities to corporate marketers.

One big event is an exclusive major live concert featuring the music industry's hottest acts on the famed Las Vegas Strip is planned, which will also feature Vegas superstars and other special performances and appearances. The event will be broadcast nationally on television and radio and webcast around the world. –Bob Grossweiner and Jane Cohen