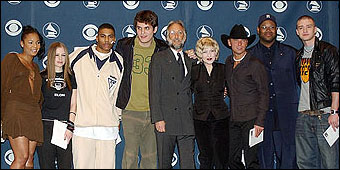 The Recording Academy has responded to the Clear Channel announcement regarding the discontinuation of independent music promoters. "We are pleased to hear the announcement that Clear Channel is severing ties with independent radio promoters, which hopefully is an important first step in ensuring equal and fair radio airplay practices," says Recording Academy President Neil Portnow. "Our Washington, D.C. office has worked closely with Senate Judiciary and Commerce committees to educate legislators on this issue, which is of vital importance to our constituents. Senator Hatch used his keynote address at our recent Grammy Entertainment law Initiative luncheon to announce his intention to hold hearings on this topic, and highlighted some of the issues in need of attention and action. We applaud Senator Hatch, Senator Feingold, and Senator McCain for their leadership on radio reform."

"Clear Channel's April 9, 2003 announcement to eliminate 'independent producers' is a welcome first step in addressing the concerns of the citizens of this country," said Lee. "Owners of radio stations must accept that the public owns the air waves. Therefore, the public interest must become a priority when decisions are made about programming. 'Pay for play' is wrong and hurts the artists as well as those citizens who love jazz, classical and other genres of music that currently receive little air play."

"We are pleased to expand our relationship with Clear Channel Entertainment and believe that this new program is a great fit for our company," said Peter Connolly. "By featuring and promoting up-and-coming live music on a local level during the popular summer concert season, the Tommy Jeans Stage program stays true to our long-standing history of bringing fashion and music together in a meaningful and relevant way."

As part of the agreement, Tommy Hilfiger is also able to produce fashion shows and/or other brand related programs on the Tommy Jeans Stages throughout the summer concert season. Additional on-site benefits include the opportunity to provide branded apparel to performing musical artists, partner with retailers, display and distribute fragrance samples, run commercials on video monitors, place advertisements in official concert program books and post signage at designated areas throughout the venues. The majority of the Clear Channel Entertainment summer concert season lineup including Tommy Jeans Stage acts will be announced throughout May.

"Affiliating Tommy Hilfiger's name with the plaza stages at 10 of our amphitheaters adds prestige to the summer concert season at those venues, as well as legitimacy and new audiences to the emerging musical acts who perform on the Tommy Jeans Stages," stated Bruce Eskowitz, president, National Sales &Marketing, Clear Channel Entertainment. "Together we will continue to enhance the live concert experience for music fans across the nation."

Clear Channel Entertainment and eBay, the world's online marketplace, have signed an agreement that, for the first time, will allow music lovers to define for themselves the right price for great deals on the hottest live concert events.

As part of the agreement, Clear Channel Entertainment will sell getAccess memberships on eBay. Membership benefits include the ability to secure tickets to more than 750 Clear Channel Entertainment concert events this year. Moreover, getAccess memberships boast a number of other valuable perks such as ticket savings including buy one/get one free offers, skip-the-line benefits at general admission shows, pre-sale offers, savings on movie tickets and rentals, and theme park savings. GetAccess memberships will be offered at both a fixed price and in auction format, giving music lovers the ability to set their own price. Auctions for memberships will start at $1.

"The eBay community loves their favorite bands and musicians," said Doug Galen, vice president and general manager of Tickets at eBay. "Clear Channel Entertainment has many of the best acts in the business. Together, we are bringing music to the fans in a whole new way. Through our relationship with Clear Channel Entertainment and the membership benefits of getAccess, eBay music enthusiasts will have unparalleled access to great deals to see their favorite bands."

Chris Hearne, executive vice president of Clear Channel Entertainment's Consumer and Marketing Services, added, "Working with eBay, we are now able to connect more fans to the music they love. This relationship enables us to tap into eBay's loyal base of 62 million customers and provide passionate music fans with new and unique opportunities to get access to see their favorite bands."

With their paid membership, eBay buyers will receive a voucher for two free tickets to a specific upcoming live entertainment event along with many other valuable getAccess membership benefits. Buyers receive vouchers via email, print them at home, and redeem them at the local box office on the day of the show. There are no service fees.

In addition to offering getAccess, eBay will be the sponsor of 17 Clear Channel Entertainment amphitheaters across the U.S., and will be conducting a special promotion that rewards music fans with prizes on-site and on-line.