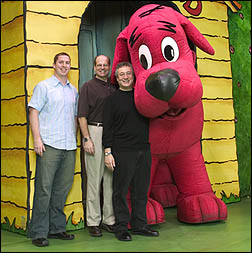 NY, New York (CelebrityAccess MediaWire) – Turnstile Entertainment and Creative Battery are pleased to announce the launching of CLIFFORD THE BIG RED DOG LIVE! based on Scholastic's beloved character. CLIFFORD LIVE will play cities throughout the US and Canada during a two year touring schedule. The Broadway style musical production will have its Official World Premiere in Atlanta April 21-25 at the Fox Theatre.

For more than 40 years, Clifford the Big Red Dog has charmed kids and parents alike with his engaging adventures and "Big Ideas." The Clifford book series has sold over 110 million copies; while episodes of the top rated TV series airs on PBS stations over 3500 times a week.

"Turnstile has wanted to produce a show based on Clifford for some time now and it has been a pleasure working with our partners, Scholastic Entertainment and Creative Battery in achieving this goal. Clifford and his friends are truly loved and this show is an event that families will greatly enjoy and never forget," says Turnstile Entertainment's Stuart Snyder.

"We are thrilled to bring Clifford to life. Families will experience the wonders of theater through this unique production, where perspective and reality change before their eyes," says Creative Battery's President and CEO, Scott Sanders. Adding, "This show invites kids and their parents to think, imagine and participate as they learn valuable lessons of friendship and teamwork.

Tickets begin at $12.50 with a limited number of VIP "Big Dog Seats". The producers are aggressively reaching out to the three generations of fans that have come to love Clifford through Scholastic books, PBS television, video and licensed merchandise. The show will be playing in scaled down arenas as well as proscenium theaters. From its original concept, the show was designed to fit equally well in both types of venues.

"This show is Broadway quality for kids," says director Gip Hoppe. "We created a charming smart show that really speaks to them." Every well-loved character from Birdwell Island – including Emily Elizabeth, Cleo, T-Bone, Jetta, Charlie and of course Clifford star in this energetic spectacle. The story revolves around Emily Elizabeth who wants to put on a show with her best friends. Everyone has different ideas, but ultimately the kids decide that the story should be about Clifford's life, from puppy-hood on.

"Clifford The Big Red Dog LIVE features a cast of 12, a crew of 20, and a 10' tall mechanical Clifford puppet that will thrill kids and parents alike. It is a large-scale production that requires four tractor-trailers to transport it from city to city. "Clifford is huge," says Hoppe. "It's an inflatable air-conditioned balloon with moving mouth, eyes, ears, and wagging tail, all operated by two actors inside. I cast people who can move, with the body strength to withstand the strain of running the puppet."

All of the show's costumes, props, and scenery were custom built for the show, including Curry's astonishing Clifford costume. "We have one of the best design teams in the world," says Hoppe, "The cast is made up of very talented, singers and dancers, performing live, not lip synched."

Tom Sturge, the show's lighting designer, says the sets and lighting scheme will dazzle audiences of all ages. "It's a combination of art and technology," he notes. "We provide the environment for the actors to do the show, and make the sets look great. It takes a lot of attention to color, but the lighting transforms the set. We go to North Pole for the aurora borealis, and to the moon to see the stars."

For the Clifford Live! Tour, Sturge employs a versatile self contained lighting computer called Grand M.A. But he hopes audiences focus on the show, and not the staging techniques. "We use a lot of technology," says Sturge, "but the whole point is to realize the vision of the show. Besides, four-year-olds are best audience you could have. They're so enthusiastic."

And of course on a 40-year time tested property like Clifford, the merchandise plays a key role in the tours overall numbers. Kids and parents attending the show will have plenty of wonderful "Clifford Live!" souvenirs to choose from, according to Josh Furlow of Turnstile Entertainment. "Merchandise includes everything from specially designed lights, apparel, pennants, hats, program books and plush toys of the characters. We created items that deliver value and excitement tied directly to the storyline of the show."

Complete tour information and dates are available at www.cliffordlive.com