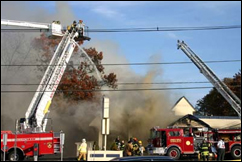 BROWNSVILLE, TX (CelebrityAccess MediaWire) — A feud between a local concert promoter and the managers of a Brownsville, Texas, bar has local authorities searching for leads in a possible arson investigation.

After a K-9 investigation pointed to signs of a flammable liquid, possibly gasoline, around the perimeter of the charred remains of Rebecca’s Restaurant & Bar, the town Fire Chief has declared arson was the cause of the fire that burned over 80% of the building, according to the Brownsville Herald.

The restaurant was set to hold its first high-profile concert the next day, featuring Indiana punk rock band Sloppy Seconds, after the concert was moved by local promoters Suttonhouse Productions from its original announced location, the nearby Chapa’s Bar.

Desiree Perez of Suttonhouse said the company was forced the change the venue because of a bitter financial dispute with Chapa’s Bar manager Efrain Martinez and owner Adrian Chapa.

Two days after the blaze, Michael Perez of Suttonhouse Productions posted a message on the company’s MySpace site, www.myspace.com/suttonhouse, announcing the show’s cancellation, and alluding to Chapa’s Bar being involved in the arson.

“This was the event that everyone had been asking for, and in an ironic twist the new venue we started working burned to the ground last night. Welcome to Brownsville,” she announcement read, according to the paper. “And yes, a full investigation is being headed, and all people are looking at Chapa’s Bar for this ‘accident.’”

“They say we owed them some obscene amount of money. …The accusations are just flying now,” she said. “I wish my brother had not put that (post) up, but people are obviously blaming Chapa’s (for the fire).”

Martinez, Chapa’s manager, denied any involvement with the arson, and said Perez’s post was an attempt to sully his bar’s reputation. He still claims that Suttonhouse Productions owes the company more than $1,800 in service fees, although the pair had never written a contract.

Martinez posted his own Internet bulletin denying involvement, but offering to help the owners, investors and clientele of Rebecca’s through their troubles.

“We feel that it is/was absolutely irresponsible of Suttonhouse Productions to impulsively name our legitimate license and bonded venue as the arson culprit,” the bulletin read. “How dare they accuse us of that fire. How dare they slander us in such an immature, unprofessional fashion on the Internet.”

Suttonhouse hopes to reschedule the Sloppy Seconds concert at the later date, after Rebecca’s finishes rebuilding. –by CelebrityAccess Staff Writers