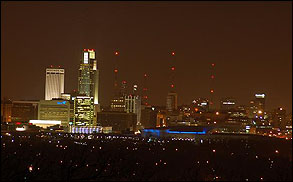 OMAHA, NE (CelebrityAccess MediaWire) — A Minnesota club owner is looking to develop a plot of land into a new concert destination. Mike Ogren, owner of the Minnesota nightclub Myth and the club's GM Jeff Kehr have been looking at a plot of land to develop a 5,000-7,000 outdoor amphitheater along with a separate two-level nightclub that would accommodate about 3,500 patrons the Omaha World-Herald reported.

The site in question, which is owned by the Union Pacific railroad, is located near the existing Qwest Center and Slowdown, a popular existing nightclub in downtown Omaha. The site is also one of the locations being considered for a new ballpark that the city of Omaha is interested in developing. Mark Davis, a Union Pacific spokesman has stated that the railroad won't consider the offer until the city has reached a final decision regarding the ballpark.

Not everyone is as enthusiastic about the proposal as Ogden is. Roger Dixon, president of the Qwest Center Omaha told the World-Herald that "Our preference is that it would not be there, but it's a free market. We can't control what goes in there."

Kehr thinks that the competition would be healthy for both venues however and sees a new venue as being a step in the right direction to revitalize the downtown area. – CelebrityAccess Staff Writers