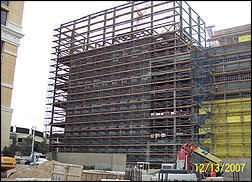 LAS VEGAS (CelebrityAccess MediaWire) — Starwood Hotels and their partners Worldwide Inc.â€™s W Hotel group along with a third unidentified casino operator are looking to team up to purchase the site of the unfinished $3.9 billion Cosmopolitan Resort Casino in Las Vegas after financial woes have left the original builders seemingly unable to continue the Wall Street Journal reported.

The Cosmopolitan had been slated to be the tallest tower in Sin City but the recent woes in the credit market and a sharp increase in construction costs have led to Deutsche Bank AG started foreclosure proceedings which put the unfinished site back up on the market.

Starwood has been interested in building a W hotel in Las Vegas and had been looking to build a 3,000 room project, but pulled out of the deal with the Edge Group due to rising construction costs.

Where this third deep-pocketed investor is coming from is hard to say, but the WSJ speculated that it is likely a firm like DubaiWorld as the weak dollar would provide for a relatively low entry fee into a major Vegas casino for an investor in the cash-rich gulf oil states. – CelebrityAccess Staff Writers