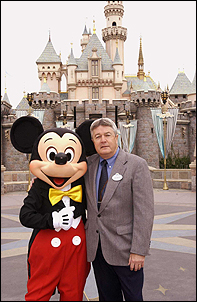 Condon told CelebrityAccess he planned to open his own office, but decided to join the Capitol team
after a lot of discussion with Mick Scully and finding that he could fit into their operation and bring something to the table in a positive way.

"I also
was looking to remain as independent as I could and opening the
West Coast
office gives me exactly that with a great company to work with.
It also
gave me a wide open territory and existing product to offer
some old and
hopefully new friends in the park, fair, casino, PAC, and
corporate
entertainment world.

"Although I enjoyed most of what I was doing at The Disneyland
Resort, continuous organizational changes made it clear about a year
ago that my role had changed a lot since I started there almost five years
ago," he continued. "And since my overall plan was to come back into
the agency and production world after Disney, whenever that time came to be, I
decided to move on after the end of this summer season.

"Capitol has a very active Performing Arts Center division and
there was no
one really covering the West Coast. This added another
dimension to my
efforts in an area that is very interesting to me.

"I will miss
some great people at Disney and excited about meeting a lot of
new folks in
the future."