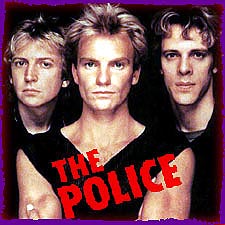 Miles Copeland of Firstars Management has issued the following statement concerning The Police.

The upcoming induction of the Police to the Rock and Roll Hall of Fame has sparked rumors of a reunion and some misquotes apparently emanating from Stewart Copeland, the band's drummer who mentioned an earlier request from Nelson Mandela for the Police to reunite for a special event in South Africa. There was also mention that Bono would replace Sting on that concert.

The fact is, the Police did not accept to play for this event, nor was Bono asked, nor did the event ever take place, nor are we sure Mandela was ever involved in the first place.

Meanwhile the Police will certainly all be performing together at the Rock and Roll Hall of Fame. Bono has not been asked to perform with them — though that would be great fun as they are all friends.

The Police have no plans beyond the Hall of Fame performance except the re-release of the re-mastered, re-packaged Police catalog next year in celebration of the Police 25th anniversary.

The Police are looking forward to being inducted into the Rock and Roll Hall of Fame and had this to say:

"It was our intention 25 years ago to blow our predecessors out of the water, but it is now humbling to be chosen by our peers to be given this great honor." — Stewart Copeland

"It was worth all the pain and anguish, to finally, after 25 years to get the gold watch." — Andy Summers

"I am very proud of the legacy of The Police. We were a damn good band and it still holds up. And it's an honor to be voted into the Rock and Roll Hall of Fame and to be recognized by one's peers. I've been to one of the induction ceremonies and it was great fun, I'm really looking forward to the evening." — Sting