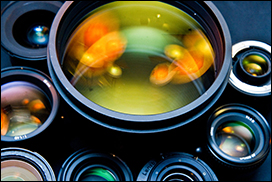 (Hypebot) – Copyright Office legislation is moving through Congress, and the House of Representatives is expected to take up the bill when they return from Easter Recess. In this op-ed, leaders from five leading advocacy organizations come together to explain why this debate is important for all creatives.

Most everyone knows the phrase “a picture is worth a thousand words.” It captures the notion that one image can instantly convey complex ideas and world events, changing how we think individually and as societies. For instance, who could forget the picture of an American sailor kissing a woman in Times Square, which expressed the elation, joy and excitement of the nation as World War II came to an end. And the 1989 image of a lone protestor standing before oncoming tanks in Tiananmen Square still resonates deeply today. In both cases, visual artists—who depend on strong copyright protections to make a living—captured those iconic images.

Visual artists include illustrators, graphic designers, artists, photographers, visual journalists, videographers, and others who create and license their works for the news media, magazines, advertising, books and other publications, consumer products, digital platforms, multimedia presentations, and broadcast. Typically, they are one-or-two-person businesses and small family enterprises that not only create, but are responsible for running all facets of a small business.

To help facilitate the marketplace for creative works, visual artists have long called for modernizing the US Copyright Office. That’s why we strongly support HR 1695, the Register of Copyrights and Selection and Accountability Act, which would make the Register of Copyrights, who leads the USCO, a presidentially appointed, Senate confirmed position. The bill recently passed out of the House Judiciary Committee by the overwhelming bipartisan vote of 27-1.

The Copyright Office, which resides in the Library of Congress, maintains copyright registration and recordation databases upon which creators, licensees, users and consumers depend, but which are sadly outdated. Indeed, despite repeated calls by former Registers for reform, including releasing the most forward looking IT plan in the Office’s history, it has been unable to modernize because it lacks the autonomy to do so. The Office’s efforts have been frustrated because it resides in the Library of Congress where it competes with many other Library priorities for resources, technology and staff. This arrangement may have worked in the past, but the creative economy now contributes $1.2 trillion to GDP and supports 5.5 million jobs. The Register must be given the autonomy to modernize the Office to suit the specialized needs of the copyright system. And it is appropriate that the office of the Register be elevated to a stature commensurate with the economic sector to which the duties of the Office are so critical.

The Office also has an important policy mission, statutorily acting as Congress’ impartial advisor on copyright law and policy. Historically, the Copyright Office has been an invaluable resource to the Congress, providing expert counsel on issues large and small. This is particularly important for individual creators and small businesses, for without this dedicated “think tank,” Congress might not hear the plight of our creative members on critical issues such as how to handle copyright infringement claims too small to justify the expense of a federal law suit. The Copyright Office must have the autonomy necessary to continue its vital advisory role to Congress.

Some critics of the legislation have suggested that elevating the Register is an attempt to “give more power to Hollywood”—something we in the visual arts community find puzzling. Without a doubt, the Copyright Office’s technological shortcomings affect visual artists far more than movie studios and record labels. For instance, Variety reported that 563 movies were released in 2014 by the entire movie industry, which is a relatively small number of copyrights to register for an entire year. By contrast, a single photographer can take over 500 photos in one shoot, and may create as many as 50,000 individual photographs per year. Further, unlike large entertainment companies, we don’t have the luxury of in-house professionals who can dedicate their time to navigating the complexities of the registration process. As a result, many visual artists forego registration, which then makes defending one’s rights in court a virtual impossibility. Put another way, the Copyright Office’s problems are a de facto regressive tax—the smaller the creator, the more adversely they are impacted.

Congress should swiftly pass HR 1695, thereby taking an important first step towards fixing these problems. By ensuring the Register has the autonomy necessary to begin implementing operational reforms and continuing to provide impartial advice, Congress will help ensure that visual artists and all creators can continue creating works that contribute to our economy and help shape our society in the digital age.