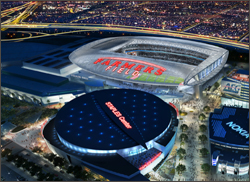 LOS ANGELES (CelebrityAccess MediaWire) — Cost projections for the refurbishment of a wing of the Los Angeles Convention Center may cost tens of millions of dollars more than city budget planners anticipated, according to documents released on Wednesday.

The documents, part of the plans for the new, downtown NFL stadium project, revealed that the convention center refurb, which includes demolishing a wing and rebuilding it at a new location, would cost between $287 million and $358 million, well above last year's estimate of $275 million the Los Angeles Times reported. The remodel of the convention center is planned to make way for Farmers Field, the new $1.2-billion football stadium planned for the city.

According to The Times, the higher estimates are due in part to the decision to add to the proposed redesign of the convention center, a new ballroom among the additions, which would be the largest in Los Angeles. Consulting firms hired by the city said that the additional space was "vitally important" to attracting convention business.

The council is scheduled to finalize plans for the stadium by the end of the month, but key issues remain unresolved, including financing and finding an NFL team to play at the stadium. – CelebrityAccess Staff Writers