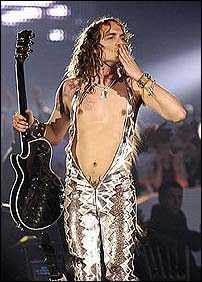 LONDON (CelebrityAccess MediaWire) — According to the BBC, Hawkins said “his addiction had ruled his life.” The lead singer of glam rock band The Darkness is leaving the group after a battle with drug addiction. Justin Hawkins, 31, spent nine weeks in The Priory clinic in a bid to kick his cocaine addiction.

The singer, famous for his catsuits and high-pitched vocals, said the band would be "damaging" to his recovery.

The Darkness, who dominated the Brit Awards in 2004, is set to continue. Hawkins is still reviewing his options.

The group scored a major hit with their first album, Permission To Land, which sold 1.5 million copies.

The pressures of fame, including press attention and constant traveling, led Hawkins to cocaine use.

He told the Sun newspaper: "I became secretive, volatile and verbally abusive, a really unpleasant person to be around. There were lots of periods I don't even remember, blackouts.

"I couldn't even tell you how much I was drinking – it was all day when we were on tour. My weapon of choice was vodka.

"It has affected every aspect of my life, with the band and my girlfriend Sue."

He said he would continue to visit The Priory and "would love to become a counselor".

The band is reportedly "in a state of shock" having hoped to have changed Hawkins mind about leaving the band.

Despite their early success, the Darkness notched up disappointing sales for their second album One Way Ticket To Hell And Back.