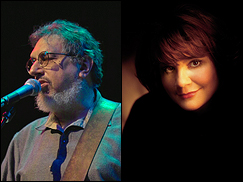 (CelebrityAccess MediaWire) — Old friends can make great times, and great musicians can make magic. Legendary acoustic virtuoso David Bromberg recently sparked the interest of old friend Linda Ronstadt during a performance at the Fillmore in San Francisco, developing into a collaboration of two icons of the 1970’s pop rock scene.

The Grammy-winning Ronstadt will be coming to Wilmington, Delaware, where Bromberg lives, to rehearse and to take the unique partnership to the stage for an “unscripted” performance at the Grand Opera House on June 13th.

“Linda and I are two old friends getting together to have some musical fun and giving the audience a chance to listen to the results,” said Bromberg. “We’re all excited to see what will happen.”