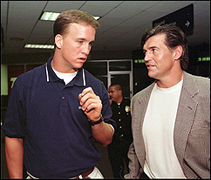 Condon and Kremer together bring more than 70 players to the agency, with Condon representing superstars such as Peyton and Eli Manning, LaDainian Tomlinson, Drew Brees and Chad Pennington.

The new divisions are called CAA Football and CAA Baseball respectively, and will handle sports-based representation, while the athletes can take advantage of CAA’s other divisions for endorsement deals and marketing.

Last month, longtime football agent Steve Feldman, who represents Rodney Harrison and Lorenzo Neal, among others, moved his roster of players to The Gersh Agency, developing a sports division at the Hollywood firm. –by CelebrityAccess Staff Writers