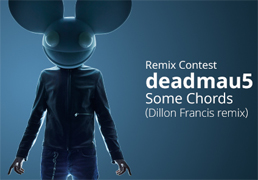 HOUSTON, TX (CelebrityAccess MediaWire) – The Dillon Francis remix of deadmau5’s “Some Chords”–which appears on his current retrospective double-album, 5 years of mau5–turned heads upon its reveal earlier this year when Francis launched it at Mad Decent Block Party. Now, burgeoning producers everywhere can take their turn with the track as Beatport Play launched the deadmau5 “Some Chords” Dillon Francis remix contest.


Launched December 30th at http://btprt.dj/1yAXimj
to round the year, Beatport Play has got a bonafide remix banger courtesy of Dillon Francis. Last month, the LA-based producer joined a heavy cast on 5 years of mau5 (Ultra Music) with his remix of deadmau5 2010 classic “Some Chords,” the signature opener to the producer’s fifth full-length album 4×4=12, awash in synth stabs and neon electro grooves.


Re-work the Dillon Francis take and enter the latest Play remix contest by January 26, 2015 for a chance to win. The grand-prize winner will see their work made available on Beatport in an exclusive remix release via mau5trap as well as receive an Antelope Audio Interface, assorted Eurorack modular synth modules and some of the latest software. Submissions can be made now through January 26, voting extends from January 27 to February 9 and the winner will be announced on February 24.


Meanwhile, deadmau5—nominated this year for his sixth GRAMMY award in the “Best Dance/Electronic Album” category for while(1<2)--is gearing up for a New Year’s show in Rio De Janeiro, Brazil at the Reveillon Paradise Weekend as a part of group of select South American dates. Next, he’ll return home to Toronto where his next North American appearance will be at Guvernment on January 25 as part of the famed venue’s closing show #GUVFINALE. It will be a bittersweet moment for the Canadian producer as he bids farewell to the place that launched his musical career. . --by CelebrityAccess Staff Writers