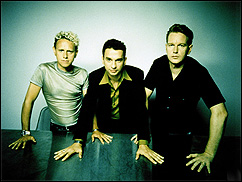 (CelebrityAccess MediaWire) — Depeche Mode have added to their 2006 summer festival run with the announcement that they will play the Benicassim festival.

The band, who recently revealed that they will be headlining California’s Coachella festival between on April 29th and 30th, will also head to the Spanish event, which takes place just outside Valencia.

Celebrating the release of their latest album ‘Playing the Angel,” the electro-pop-rockers are the first act to be confirmed for Benicassim, which will run July 20-23.

The festival is now in its 11th year, and normally takes place at the beginning of August. The town’s mayor said moving the bash to July was intended to separate it from the Spanish holidays in August.

More UK visitors are expected at Benicassim next year, as the hugely popular Glastonbury festival is taking a year off. –by CelebrityAccess Staff Writers