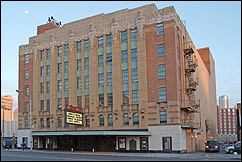 DETROIT (CelebrityAccess MediaWire) — Vincent Charles Paul was named president and artistic director of the Detroit Music Hall Center for the Performing Arts after a six-month nationwide search. He replaces Cameron "Sandy" B. Duncan who is retiring after many years.

"Bringing a talent like Vince to Detroit is one of the most exciting developments in years for our region's cultural and arts environment," said Alex L. Parrish, chairman of the board of the Music Hall. , and a Detroit attorney and senior partner at Honigman Miller Schwartz and Cohn, LLP.

"Though he is only 43, Vince has operated for over two decades at the top tier of New York's world class performance arts scene. It is such a coup for us to be able to bring him home to Detroit," said Parrish. "Vince has a unique combination of operational management skills, industry relationships, creative energy, artistic vision and enthusiasm. We expect him to be a great impresario."

Paul previously spent 21 years in New York working in a wide variety of positions for New York performance organizations and for touring productions. He is also founder and president of World Arts, Inc., a New York-based artist's management company.

At various times, World Arts has been ranked as high as the nation's fourth largest agency in terms of dance performance sales. Since 1994, the company produced over 1,200 performances throughout North America, Europe, Asia and Australia. World Arts' clients have included The National Dance Company of Spain, Les Ballets de Monte Carlo, The Moscow Circus, Baryshnikov Dance Foundation's Achilles Heels, Complexions Contemporary Dance of New York City, The Washington Ballet, Dance Cuba, Tango Flamenco, and Les Ballets Africains. A number of World Arts' shows have been presented at the Music Hall, including Tango Flamenco and Les Ballets Africains this past season.

"We are going to make Music Hall the 'Theater of the People,' a unique jewel in the downtown theater district," said Paul, a 1985 graduate of Michigan State University's School of Fine Arts and a Farmington Hills, Michigan native. "Over the years, I've represented many of the most prestigious and exciting stage productions from around the world. We are going to bring that kind of performance excellence to the people of metropolitan Detroit on a regular basis at affordable prices.

"Sandy Duncan, my predecessor, created a great foundation, and it's now my job to lead Music Hall to a national and world-class level," he continued. "I plan to immediately reach out to the Greater Detroit community and to individual, foundation, and corporate sponsors and respond to their expectations of excellence in the educational and cultural programming that should be and will be offered at Music Hall. We will present Jazz, Contemporary Dance and Theatre on a national and international level."