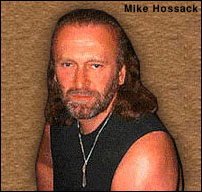 Doobie Brothers drummer Mike Hossack was seriously injured in a motorcycle accident last Friday, June 22, while on his way to Lake Tahoe where the group was scheduled to play that weekend.

According to CNN, Hossack, 54, lost control of his bike about 50 miles east of Sacramento, Calif., and suffered multiple fractures. He was airlifted to a medical center, where he underwent surgery. "He is expected to be fine," said a hospital spokeswoman.