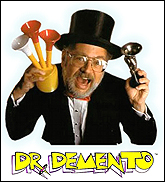 CHICAGO (CelebrityAccess MediaWire) — After 40 years on the air, humorist, musicologist and radio host Dr. Demento (AKA Barret Hansen) will be going off the air.

A post on his website said: "This was a very painful decision for the Doctor…he really hates to let it go after almost 40 years…but he has come to agree with his manager and his family that it's necessary. The broadcast has been losing money for some time."

Hansen created the Dr. Demento persona in 1970, while working at Los Angeles station KPPC-FM, and has since been a fixture on the airwaves, broadcasting comedy and novelty songs along with arcana from the history of recorded music. His show was syndicated for more than 15 years on the Westwood One Radio Network and then with On the Radio Broadcasting.

Hansen is well known for his encyclopedic knowledge of recorded music of all forms and graduated from UCLA, with a master's degree in folklore and ethnomusicology.

All is not lost for the good Doctor's fans however, as he plans to continue to produce his weekly show on the Internet. A version of the Internet broadcast will also be carried by Amarillo-based KACV-FM. – CelebrityAccess Staff Writers