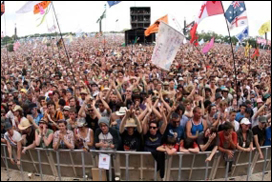 GLASTONBURY, UK (VIP-NEWS) — As reformed Britpop kings Blur closed this year's Glastonbury Festival with a headline slot on the final night, organizer Michael Eavis revealed he already has "three or four" superstars lined up to headline the festival's 40th anniversary next year.


But they will struggle to improve on this year's event, he added.


"I seriously don't think that we can ever do it better than we have this year," the 73-year-old told reporters.

Mr Eavis will pay a £3,000 fine after Bruce Springsteen's set overran on Saturday – but he said it was worth it.

The rocker went nine minutes past the curfew. "It's not a lot of money, come on – the last nine minutes were absolutely spectacular," Mr Eavis said.


"He did a hell of a show. What energy that chap's got! It's probably the best show he's done in his life."


Speaking about plans for next year, he said: "We've got one or two headliners that haven't played for a few years."


He is also talking to two major bands that have never played at the event, he said – but declined to name names.


"They're all on the phone at the moment so there is the chance of something different again.


"The bands that have never played before will be thinking they should come."


Mr Eavis also announced that he had made enough money this time to donate extra to the festival charities, Water Aid, Greenpeace and Oxfam.

Last year the show was only able to give half the amount he had planned, he said.

"We'll double up on that. We'll catch up on last year this year, so they'll get a lot more money from this year." –According to BBC