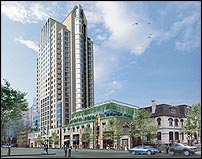 OTTAWA (CelebrityAccess MediaWire) — A committee of the Ottawa City Council has decided not to accept a proposal by supporters of the Elgin Street Concert Hall to extend a deadline for the troubled project to obtain continued federal financial backing for the year. Staffers from the city recommending extending the deadline to Feb. 28 2008. The current funding deadline for the Ottawa Chamber Music Society (OCMS) is November, the Ottawa City Journal reported.

The city had agreed in 2004 to fund the project with $6 million, but that funding was contingent on securing matching funds from the Canadian and provincial government. According to the Journal, project members faced some hostility from some of the committee members who seemed reluctant to set aside such a large block of funds that could be used in other ways for the city's budget. Some council members noted that they felt they needed a higher "comfort level" about the amount of money being provided by the federal gov't.

Colin Cooke, the president of the OCMS said that he expects an answer from the feds in April or May. Ultimately, the council committee voted to recommend a deadline extension until November.

"“It’s great," Cooke told the Journal. "By November, we should have all of our ducks lined up . . . Most of the funding should be in place." – CelebrityAccess Staff Writers