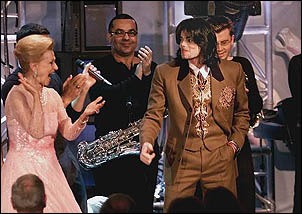 The 15th Carousel of Hope, the world's premiere gala benefiting childhood diabetes, hosted by Marvin and Barbara Davis, is set for October 15, in Beverly Hills, CA at Merv Griffin's Beverly Hilton Hotel. Elton John, Sting and BB King will headline the entertainment program, and Jay Leno will once again be master of ceremonies. Sidney Poitier will be presented the "Brass Ring Award" by Halle Berry.

Since its founding in 1978 by the Davises, the Carousel of Hope has raised over $60 million to date on behalf of the Barbara Davis Center for Childhood Diabetes in Denver, where more than 4,000 youngsters receive specialized care for diabetes. The renowned center will double in size over the next three years.

Along with a silent auction, the evening's program will include a musical performance produced by George Schlatter. David Foster will be the musical director and a committee chaired by Quincy Jones heads the musical program.