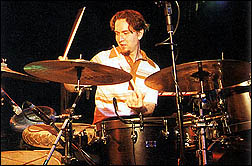 Garbage's drummer Butch Vig, who could not make the European tour last fall due to illness, is again unable to perform on Garbage's current tour. Vig is suffering from "an acute inner ear infection causing painful sensitivity to sound," according to the band's website reports.

Session drummer Matt Chamberlain, who has manned the skins for Fiona Apple and Tori Amos, will be filling in for him until he recovers. Chamberlain began sitting in May 31 in San Diego.

Last November Vig sat out dates on a European tour after contracting Hepatitis A, an illness that turned his skin and eyes yellow and left him unable to walk. Chamberlain, who played on some tracks on the band's most recent album, filled in for those performances as well.