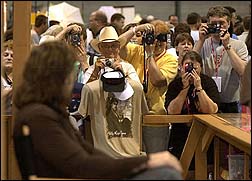 Fan Fair 2002 brought $17 million to the local community – an increase of almost 10% percent over 2001 – according to direct impact numbers released today by the Nashville Convention and Visitors Bureau and the Country Music Association at the Nashville Sports Authority meeting.

"At a time when concert ticket sales are soft across the country, we were not only able to increase our aggregate attendance, we were also able to increase the financial impact of Fan Fair on the Nashville community," said Ed Benson, CMA executive director. "Fan Fair has proven its potential as a world-class music festival that showcases Music City, drives tourism and generates a strong base of local revenue. Our involvement with the City, the Convention and Visitors Bureau, the Sports Authority and the Nashville business community has paid off for everyone and truly provides a great platform for the continued growth of this unique event."

"This is the biggest impact we have seen to date and indicates that Fan Fair's move was great for CMA and for Nashville," said Butch Spyridon, executive vice president, NCVB. "This is a positive sign for the future."

On-site research revealed that the typical Fan Fair attendee is younger than in previous years. In fact, the average age went from 40.3 to 37.9. Attendees typically travel with friends and while Tennessee accounts for nearly 9 percent of Fan Fair attendees, Ohio and Michigan are close with 6.5 percent and 6.3 percent. Attendance was spread over all 50 states and several international countries including Canada, England, Germany and Australia.