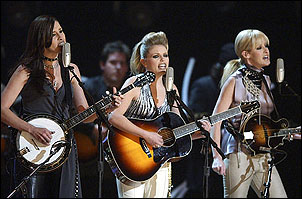 A new survey of 1,200 online country music fans shows that a majority are "less likely" to purchase Dixie Chicks CDs, concert tickets and merchandise due to comments made by lead singer Natalie Maines to a London audience almost four weeks ago.

New Media Strategies (NMS), an online business intelligence and marketing company, surveyed more than 1,200 country music fans in the most popular entertainment and country music communities on the Internet and found that 58 percent are less likely to support 'The Chicks' at the check out counter because of the ongoing controversy surrounding Maines' comment that the group was "ashamed the president of the United States is from Texas."

A number of industry reports show that sales of the group's new release, "Home," dropped by over 40% since the comments were made.

"While The Dixie Chicks' new release may be called, 'Home,' this is a classic case of forgetting where you come from and who your fans are," said New Media Strategies CEO Pete Snyder. "Country music fans are traditionally more conservative and pro-military. It was unquestionably a poor decision on Maines' part to make a comment like this in a country music venue. As this survey shows, it was a decision with a dollars-and-cents impact."

Methodology: Using its Cyberstrike software and Brand Perception Index methodology that scours the Internet for online consumer opinion, New Media Strategies surveyed over 1,200 discussions (March 15 – April 9, 2003) from country music fans in the 50 most popular entertainment and country music focused communities on the Internet.