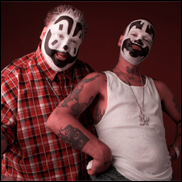 LANSING, MI (CelebrityAccess) — Insane Clown Posse decided to cancel a show rather than to comply with a venue's demands to not spray soda all over the crowd.

According to CBS News, ICP was playing two shows at The Loft in Lansing, and sprayed approximately 600 2-liter bottles of Faygo soda during their set. The soda reportedly seeped through the floor and damaged a neihboring business, leading the Loft to pass on hosting the subsequent show on Saturday if the band was not willing to forgo their soda act.

However, the band decided to take a pass instead of modifying their show.

“Hey ninjas. Sigh… tonight’s scheduled ICP show at The Loft has been cancelled due to the venue’s concerns about Faygo. Last night’s sold out show was off the (f***) chain, but the venue–which had never hosted an ICP show– wasn’t exactly prepared to deal with cleaning up 1200 liters of Faygo. So this morning they said ICP could perform the Riddle Box Show as scheduled…but only if there was no Faygo! Well…as every Juggalo knows, it ain’t a (f***) Wicked Clown show without Faygo!"

One attendee at the Friday night concert wrote that the venue had tried to prepare for the Faygo onslaught, stating that they had put plastic and tape down, but said that the group's fans started ripping the protective measures out.

Elizabeth Robinson wrote: “The loft was prepared for the faygo I was there great concert ….the worker had carpet tape down and plastic tape up ….juggalos got to feeling themselves and started ripping the plastic down and breaking the pole it was attached to …they had an idea what was going to happen but (weren’t) fully aware what happen when the fam get together and feels the carnival sprit!!! It was a blast!!!!”