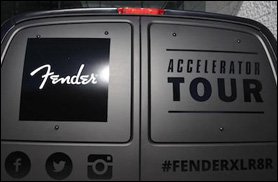 FULLERTON CA (CelebrityAccess) — The costs of road life for touring bands can get unwieldy, unanticipated expenses can impact artists’ profits. Richard McDonald, executive vp of Fender Brand, is all-too-keenly aware of such hazards, having spent 19 years as a touring guitarist for world-music group Morningstar.

“There’s nothing like being broken down on the side of a highway in some P.O.S. vehicle in the middle of Minnesota, and you don’t know if you’re gonna make the next gig,” says McDonald. “It just feels so good to have a shiny, safe vehicle with safety in mind, so you can get to the next gig.”

Bearing this need in mind, Fender has introduced its first Fender Accelerator Tour, which will provide paid tour support for rising bands: a 15-passenger van, promotional and marketing support, and Fender gear including electric and acoustic guitars, basses, amps and other accessories. Participating bands include Night Terrors of 1927, Priory, Matthew Curry, Marmozets, Deap Vally and Waters on their respective current tours, running this week and extending through June.

Fender is not alone in its patron-like support of indie bands. Over the last four years, companies like Converse, Mountain Dew, Sour Patch Kids, Intel and Red Bull have all offered free recording, touring, lodging and performance resources to rising and unsigned bands with minimal strings attached in terms of content restrictions or owning the bands` recording rights. Indie-rock acts tend to attract a younger, digitally savvy fanbase, which can in turn lend credibility to brands who can reach them at a fraction of the cost they would otherwise spend on a multi-million dollar TV campaign.

The Fender Accelerator Tour was created in partnership with CAA Marketing and production partner NCompass, with digital content sourced by participating artists expected to roll out over the next three months. "Is there any brand in the world better suited to support emerging artists and help them get the most out of their tours?” CAA Marketing’s Marshall Eskowitz says. “This brand is already part of the musical journey of the artist. Fender just wants to amplify and accelerate that journey.”