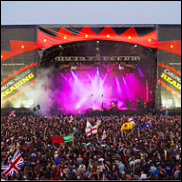 LONDON (VIP-NEWS) — Reading And Leeds Festivals organizers have issued a statement confirming that no tickets for the 2009 events are available after becoming aware of bogus ticket-selling websites claimed to be offering them.

Two websites had been selling what they claimed to be tickets to the bash – but festival chiefs said the sites had "no access" to tickets, which are not on sale anywhere yet.

The statement read: "Festival Republic, promoters of the , wish to make it clear that no tickets are currently available for this year’s festival following the appearance of websites claiming to be selling tickets for this year’s event.

"The sites [claiming to sell tickets] are not official and have no access to tickets for this year's event. Line-up and ticketing details for the event will be announced in due course and Festival Republic advice is, as ever, to only purchase tickets via official links." According to NME.com