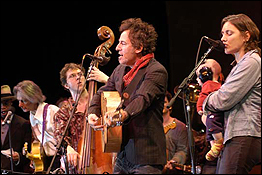 Entitled The Nebraska Project, this 25th anniversary celebration of the classic Bruce Springsteen album featured on one stage a distinctive roster of singer-songwriters, bands and instrumentalists.

Performing their own arrangements of one of the ten Nebraska songs were Laura Cantrell, Dan Zanes, Vernon Reid, Mark Eitzel, Michelle Shocked, Meshell Ndegeocello, The National, Chocolate Genius, Marc Ribot, Martha Wainwright, Jesse Harris, Kevn Kinney, Lenny Kaye, Gary Lucas and Harry Manx. The Boss himself watched the concert from the audience before joining the artists on stage for the encore of Woody Guthrie’s "Oklahoma Hills" that lasted well past the intended end-time.

The free gala event attracted the largest concert crowd the Financial Center Winter Garden has ever hosted. Performance highlights were many. In addition to the impromptu encore performance, the scheduled artists indeed paid tribute to Springsteen by putting their own spin on his classic Nebraska songs. The National turned "Mansion on the Hill" into a suite-like arrangement, which left the crowd absolutely buzzing; Mark Eitzel injected his own vulnerable vocal delivery – and some smart, spare guitar work – into the melancholy-filled "My Father's House," showing he meant each word of his introduction "It's truly an honor to be performing this song" ; Otis Taylor entranced the audience with a banjo-driven, blues-edged rendering of "Open All Night," ; Jen Chapin and stand-up bassist/husband Stephen Crump stripped down the original arrangement of "Born In The U.S.A." to a dirge-like vocal-and-bass duet – beautiful, haunting, and not the reaffirming version Springsteen released in 1984; plus Kevn Kinney, Lenny Kaye, and Dan Zanes offered up rousing, joyous strum-a-thon on "Reason To Believe."

(CelebrityAccess MediaWire) — Milwaukee World Festival Inc., which puts on the annual Summerfest concert series, has announced a number of changes in its front office, including promoting entertainment director Bob Babisch to VP Entertainment.

Babisch, who has always been instrumental in planning, will head planning and securing entertainment for the 11-day festival, according to the Milwaukee Business Journal.

Director of Marketing John Boler has been promoted to VP Sales and Marketing.

Assistant Director of Sponsorship Sarah Smith was upped to Director of Corporate Sales. All of the appointments were effective January 1. –by CelebrityAccess Staff Writers