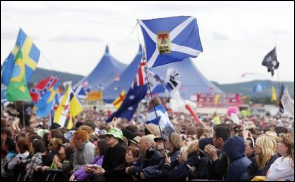 LONDON (VIP NEWS) — Music fans will be banned from taking flags to this weekend's Reading and Leeds festivals, with Glastonbury considering the same move next year.


Tall flags have become common in front of stages at many UK festivals.


Reading and Leeds boss and Glastonbury operations director Melvin Benn said they were "a nightmare" because they blocked the view for many fans.


Flags would be confiscated at the arena gates, he said.


"I'm doing everything I can to ban flags this year. For some reason those that buy a flag want to be closest to the stage."


Mr Benn said he was also talking to Glastonbury founder Michael Eavis about introducing a ban there.


Dozens of flags greeted big acts at Glastonbury this year, with fans complaining about the view during Bruce Springsteen's headline set in particular.


"You couldn't see the acts," Mr. Benn said. "The flags were everywhere. There have always been flags but not to the level that there has been. And the flags have become very long and tall."


He also said some people were using flags to advertise goods.


But Tony Withers, who has a flag stall at the Leeds, Glastonbury and V festivals and sells flags online, said they added to the festival atmosphere.


"To many people, it makes the event," he said.


"People use them as a tent marker and then, as the show goes on, they lift them off the ground and take them to the stage. They want to get on TV – that's the big thing now."

Reading Festival is also cracking down on crowd-surfing, where fans are passed over the heads of the audience until they reach the front.


At most concerts, fans are simply put back into the crowd when they reach the security pit below the stage.


But at Reading, they will be ejected from the arena and forced to walk back to the main entrance to get back into the site.


"Reading Borough Council Health & Safety team consider it quite dangerous and we will endeavor to try and limit the amount of times people will do it," Mr. Benn said.


Radiohead, the Arctic Monkeys and the Kings Of Leon will headline Reading and Leeds festivals, which take place simultaneously between Friday and Sunday. –According to BBC