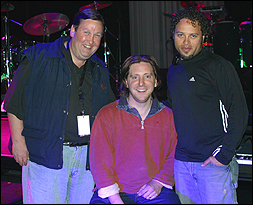 NEW YORK (CelebrityAccess MediaWire) — TAO Misc (part of the TAO Group) and Major Tom have joined forces to deliver a new level of Health and Safety for the Touring industry, pioneered on Diana Ross's European 'I Love You' Tour.

Highlighting the lack of awareness of responsibility for Health and Safety issues on tour, and seeking to eliminate the 'fingers crossed' approach to this important issue, TAO's Andy Cotton, award winning production manager and lecturer for the UK Home Office on Event Safety, and Major Tom's Chris Marsh, Diana Ross Production Manager / Sound Engineer, have pioneered a new approach to H&S for the live touring market, ensuring all legal requirements and safety measures are met, and proving it can be done in a cost effective manner on a medium size tour.

"Having fully researched current health and safety regulation and legislation I found as production manager the buck stops with you," explains Chris Marsh. "It was scary to see how much responsibility I have in making sure the show is safe in every way, and how many things you thought were just practice or venue related ideas that were possibly an obstruction to your every day work, are actually a legal requirement."

"The health and safety of your crew and audience shouldn't be swept under the carpet," he continues. "I'd worked with Andy Cotton on the recent Michael Ball Tour and numerous summer events and respected his approach. We both strongly felt shows like this need someone to oversee the whole H&S, security and welfare of the tour, and as experts TAO developed a complete strategy, providing complete peace of mind and enabling the crew and myself to get on with our jobs."

TAO produced all health and safety documentation for the tour, risk assessments (including fire under the new Regulatory Reform Act), event guidance documentation, signing off rigging, staging and flying of lighting and PA's, and all nitty-gritty specifics. Cotton explains: "Factors such as Miss Ross's four costume changes in huge ball gowns up and down stairs provide issues in themselves. Handrails have to be in a certain position to avoid snagging or tripping, as her falling could lead to the whole show being pulled."

"We've produced crew tour welfare books listing nearest amenities such as pharmacies, walk-in NHS centres and opticians, and included the basic principals of safe working. We also monitor crowd movement and reaction during the show through to overseeing traffic and pedestrian management. We've been in a position to assist the tour and not been a pain in the arse! My role and focus is to look around site and highlight H&S issues, and not only report the problem, but provide the solution. A weight is taken off the Production Manager and crew knowing they're working in a safe and un-litigious environment."

Marsh agrees. "I've not once been presented with problems quoting sub sections as to what can't be done, it's been presented as we have an issue and we have a practical solution, which is exactly what we need."

Another requirement was liaising with American crew and suppliers re: kit. "Their fire certificates are not valid in the UK so we've had to get items tested to European and UK tour standards," continues Cotton. "With different legislation, the whole approach is different. It's been a challenge to get the American crew to come on board, but people on this tour now understand the importance. On a day to day basis it's not going to add whizzes and bangs to the show or add to ticket sales, but it's when things go wrong that it'll be considered invaluable."

Diana Ross's Tour Manager and fellow American, Mike Droke agrees. "Everyone's been much more H&S conscious. It's a great guard against litigious action so things that normally we've said 'that's fine' and deemed safe we're taking a second look at. It's good to have that extra protection. I've seen a bit of this in Australia, but the States isn't all over it yet. On this tour every sheet and curtain in fire retardant, every cable is taped properly, and we know no-one is going to sue the sound engineer because the sound is too high."

"Having someone from TAO on tour meant we could also address changes, such as when Diana wanted a different layout on stage," continues Marsh. "As the tour goes on people can get exhausted. It's not a case of trying to catch people out, but making sure a safety zone is set maintaining a safe environment. It's made the crews lives easier and safer. Most technicians in our industry are superb, unconsciously competent, they just do it and do it right, but sometimes it needs to be documented."

"This should have been a norm in touring twenty years ago," stresses Cotton. I spoke to a senior industry agent a few weeks ago and told him how tour safety should be approached. The comment back was 'why should I spend any more money, there hasn't been an accident so what's the point?' This is an outrageous attitude. You've only got to look at recent legislation and H&S findings to see why you need it. You'll see it when you get your fine for £150,000 or god forbid somebody actually dies."

"We think it's important that industry starts to implement this practice on every tour, concludes Marsh. "Our biggest fear is people will only wake up to this when something goes really, really wrong. I will continue to work with TAO to take this to every tour I am involved with. I'd rather be one of the first test cases of introducing this health and safety practice rather than one of the first in court defending my name." – CelebrityAccess Staff Writers