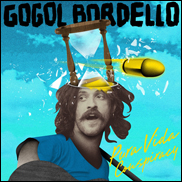 According to The Guardian, Gogol Bordello's former guitarist and songwriter Oren Kaplan filed a lawsuit in in Manhattan Supreme Court Friday against the band's frontman Eugene Hutz, claiming that the singer tried to cut Kaplan out of the group and his share of its profits. Kaplan, who joined the group in 2000 claims that he is suing on behalf of Gypsy Punks LLC, the groups corporation.

Kaplan's lawsuit alleges that Hutz assumed control of the band's finances in 2009 and began paying himself a six-figure salary — far more than any other bandmember — from the band's accounts without notifying Kaplan. While band members get a monthly accounting of the band's finances, Hutz allegedly claims that Kaplan does not have standing to demand these reports as he is no longer a band member.

The suit also alleges that Hutz begain transferring money totaling about $500,000 to newly established corporations without Kaplan's knowledge. Hutz allegedly referred to the transfers as loans, but Kaplan, through his lawsuit, maintains that there was no record of interest paid on the loans.

Kaplan also claims that Hutz forced him out of the band. According to Kaplan, Hutz suggested that Kaplan take some time off from the group in 2011 to visit his sick mother in Israel which allowed Hutz to allegedly cut Kaplan out of a lucrative endorsement deal with a soft-drink manufacter. Kaplan contends that during this time, Hutz also used trickery to convince his bandmates to sign consent forms to force Kaplan out of the group.

Neither Hutz or Kaplan or their attorneys were immediately available for comment. – CelebrityAccess Staff Writers