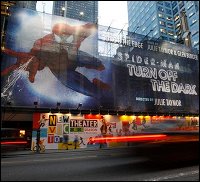 LOS ANGELES (CelebrityAccess MediaWire) — Live Nation Worldwide has been named as a defendant in a lawsuit by a former stuntman for the Broadway production of "Spider-Man: Turn Off the Dark."

According to The Wrap, former stuntman Richard Kobak is seeking a total of $6 million from a number of firms. Live Nation was included in the list of firms named as defendents because they allegedly supplied the play's producers with "certain equipment, devices, machinery, computers, computer programs, systems, navigation systems, safety devices and all relevant and necessary items" that were used in the production.

Kobak's suit alleges that the safety equipment was improperly calibrated to his height and weight, resulting in his sustaining "severe, serious and permanent injuries that required medical treatment." A previous report by the Associated Press reported that Kobak had previously claimed to have suffered a concussion, whiplash and two holes in his knees during his time with the production.

Kobak was a replacement for the first stuntman who was also injured during the production, which was plagued with delays, litigation and injuries. Former director Julie Taymor has also filed a lawsuit against the play's producers, claiming she has yet to be compensated for her work on the play. – CelebrityAccess Staff Writers