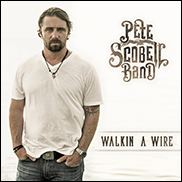 The Norwegian Pearl will set sail for Jamaica March 10-14. Among the other musical performers on the ship will be glam-metal super-group, Steel Panther.


Music has a special place in the heart of Pete Scobell. His mother was a music teacher who passed away when he was ten months old. Among the possessions that she left behind were her musical instruments. Needless to say, they left a definite mark on him. “That’s how I learned to play,” he says. “I was always trying to feel closer to her.”

Scobell’s path to the stage took some unique twists and turns with his experiences as a competitive skier and athlete, as well as his time as a Navy SEAL. He says that those life lessons have served him well as a singer and songwriter. “Everybody has life lessons. You just learn them in different places,” he explains. “Some of mine happen to be from my time in the military.”

Scobell has just released his new album, Walkin A Wire, which appeared on both the iTunes Country Album and the Billboard Country Albums charts. The 12-song collection features tunes from vaunted songwriters Dierks Bentley, Travis Meadows and Rodney Clawson. Pete opened for Wynonna Judd on her Stories and Song tour, and the soulful songstress returned the favor by adding her signature vocals to “Hearts I Leave Behind.” The track topped the iTunes Country chart the day of its release. His song “For The Ones I Stand Beside” was featured in the 2014 film The Hornet’s Nest, a documentary on the war in Afghanistan.


Pete’s current single, “Walkin a Wire,” is rising fast on the MusicRow chart, hitting #50 this week. The press is buzzing:


“I like the slight rasp in his delivery and the chiming guitar in the band’s sound . . . a tempo tune with country-boy feelings.” – MusicRow

“. . . delivered by a raw talent like Scobell, it can’t be destined for anything but success. He’s a pure singer.” – Music News Los Angeles


“This could be his major break-out hit.” – Roughstock