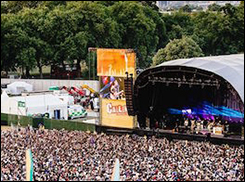 LONDON (VIP NEWS) — Calling Festival based in London and promoted by Live Nation is not taking place in 2016 according to MusicWeek.


According to MusicWeek a source said “The genre of acts are not there, so it was deemed to give it a rest,” adding that the event could return in the future. Live Nation has not commented on the report.


Branded a classic rock festival, Calling was last held in 2015 on Clapham Common, with a single day bill headlined by Noel Gallagher’s High Flying Birds. The event also featured acts such as Ryan Adams, The Hives, Wolf Alice and Echo And The Bunnymen over two stages.


The Calling brand began life in Hyde Park in 2006 as Hard Rock Calling, growing to three days and attracting artists including Paul McCartney, Bruce Springsteen, The Police, Eric Clapton, Neil Young, Roger Waters, Kasabian and The Killers. Famously, the plug was pulled on a Springsteen and McCartney medley in 2012 when their performance ran over curfew.


AEG won the rights to the site later that year, leading Calling to move to Queen Elizabeth Olympic Park in 2013. Hard Rock ended its sponsorship agreement that year and the festival again moved site, this time to Clapham, for a two-day event in 2014, when it featured acts such as Aerosmith and Stevie Wonder.