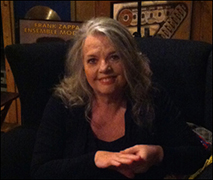 LOS ANGELES (CelebrityAccess) — Gail Zappa, wife of the late Frank Zappa and the long-serving executor of the Zappa Family Trust, died on October 7th at the age of 70.

"Gail will forever be identified as a key figure in the creative renaissance that is Laurel Canyon. But more than any singular accomplishment, she defined herself in her personal relationships, happiest when surrounded by loved ones and artists, often one in the same. The memories she leaves behind are indeed her own art form. Her searing intelligence, unforgettable smile, wild thicket of hair and trailing black velvets leave a blur in her wake," said a statement released by the Zappa Family Trust announcing Gail's passing.

Gail, born Adelaide Gail Sloatman, met Frank Zappa in 1966 while working as a secretary at the Whisky a Go Go in Los Angeles and married in 1967 when Gail was 9 months pregnant with their first child, according to Frank Zappa's autobiography "The Real Frank Zappa Book."

Following their marriage, Gail would go on to manage much of the business side of Frank Zappa's career, including overseeing his mail order company and record label. After Zappa's death at the age of 52 in 1993, Gail established the Zappa Family Trust, which, between 1994 and 2015, has released 38 albums of previously unissued Zappa material.

Gail is survived by her four children, Moon Unit, Dweezil, Ahmet and Diva.

Last year, CelebrityAccess' Larry LeBlanc sat down for an in-depth interview with Gail Zappa, which can be read here. – Staff Writers