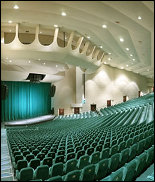 CLEARWATER, FL (CelebrityAccess MediaWire) — President and CEO of Ruth Eckerd Hall, Robert Freedman, has announced his retirement at the end of this year.

Freedman is ending his thirteen-season career both in the Bay Area community and nationally, as announced by Richard Bouchard, Chairman of Ruth Eckerd Hall’s Board of Directors.

“It is with great pride and sadness that I make this announcement,” Bouchard said. “We are now moving forward to best position the organization for the time that our President and CEO Robert Freedman will retire. In keeping with best business practices and succession plans, Robert will remain in his current position while we conduct a national search for a new President and CEO,” he continued.

“The successes we have achieved at this organization would never have been possible without the talent and support that has been provided by our Board of Directors and the staff of Ruth Eckerd Hall,” Freedman stated. “I owe a true debt of gratitude to their tireless work and dedication to our mission. Ruth Eckerd Hall would not be what it is without each of them.”

Freedman has led the theater through thirteen seasons, more than 3,000 performances, and has made more than four million patrons feel “at home” within the walls of Ruth Eckerd Hall.

He has overseen the booking of acts from Neil Young to Yo-Yo Ma, and programming including Broadway, dance, classical music and opera.

Under his leadership, Ruth Eckerd Hall (REH) has been ranked in the top 10 theaters in the world for most tickets sold to concerts and events.

In 2010, REH was named the top grossing venue for theaters seating 2500 or fewer for the year and the decade by Billboard.

Freedman also worked with staff to grow Ruth Eckerd Hall’s programming throughout the market, including the development of a four-year innovative partnership as the provider of entertainment for the 2010 American League Champion Tampa Bay Rays Summer Concert series.

Freedman worked with the team to develop and implement the fundraising drive that supported the expansion of the Grand Concourse in the Main Lobby and expanded the venue to incorporate The Marcia P. Hoffman Performing Arts Institute.

The Hoffman Institute offers exploratory and preparatory classes in dance, music and theater to all ages as well as multi-faceted community programs. The Institute also boasts the Eckerd Theater Company, a professional theater company that has been running for more than 25 years.