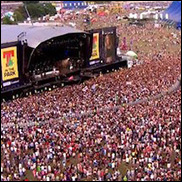 PERTHSHIRE, Scotland (CelebrityAccess) — Government officials are asking for answers after news broke that T In The Park organizers DF Concerts were in talks to stage a new 3-day festival event in Glasgow.

The proposed Glasgow Green event has raised concerns that TITP, which has been held in the region since 1997 and on Strathallan Castle Estate near Auchterarder for the last two years, may not return in 2017.

According to the Daily Record, city officials in Perthshire County have expressed concern about the effects the lack of a festival would have on the local economy.

Perthshire North MSP John Swinney told the Daily Record: “It would be incredibly disappointing if Perthshire were to lose what is one of many people’s highlights of the summer, and the economic benefits it brings to the area.

“Every year that Perthshire has hosted T in the Park for the past two decades, it has done a superb job of doing so. Every year, the local economy benefits from millions of pounds of income generated by the event organizers, businesses and the tens of thousands of music lovers who attend the festival."

According to the Daily Record, officials have been seeking answers from DF Concerts in recent weeks, with rumors of a hiatus for TITP fueled over the weekend when a senior, but unnamed source at DF Concerts was quoted as saying:

“This is under consideration but no final decisions have been reached. Everything is up for discussion and it is still entirely possible that T could go ahead at Strathallan next year. It remains the preferred option, though a number of alternatives are being examined.

“It is possible that T could take a break and a festival takes place on Glasgow Green.”