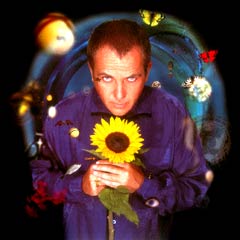 Peter Gabriel is to tour the UK for the first time in a decade in a show, which sees him performing, suspended above the stage and upturned in a giant inflatable ball. The former leader of Genesis also hops on a bicycle and rows a boat during the shows on his Growing Up Live tour, which also takes in Europe.

Dates in the UK have so far been lined up in Manchester, Birmingham and London.

The star says he hopes to add more dates to the list but the size of the production has made it difficult to find venues that can accommodate it.

Family affair: "We worked very hard on this production and I am delighted with the results," he said.

"I have however been surprised at the small number of venues in Europe that are able to accommodate our show.

"Consequently Scotland, Ireland and Southern Europe are currently not in the first list of dates, but we are working very hard to find ways to include them."

The star's daughter Melanie will take part in the shows as a backing singer.

He will also play material from his first solo album in 10 years, Up.

Released last year, it was recorded in the UK, France, Senegal and a boat travelling up the Amazon.

His UK dates are: