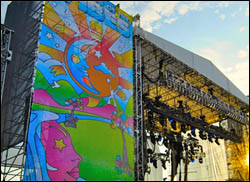 BRIDGEPORT, CT (CelebrityAccess MediaWire) — In what has become a mainstay of the summer festival season in the northeast, the Gathering of the Vibes festival has announced their lineup for the 2012 edition of the event.

In all, more than 40 artists are on the bill for the multi-stage, 4-day camp-out. Other artists set to perform include: Yonder Mountain String Band, 7 Walkers, The Greyboy Allstars, and Steel Pulse, Dark Star Orchestra, Zappa Plays Zappa, and Bridgeport's own Deep Banana Blackout.

"Gathering of the Vibes celebrates the way music allows us to share that which goes beyond words," said festival founder Ken Hays. "Right now there's a convergence of jam bands, electronica, and rock and roll – bridging the generations and truly making this a festival with something for everyone."

This year's Vibes is inviting their 130,000 Facebook followers to select an up-and-coming band to perform at the fest. Participants can use the Road to the Vibes Facebook app to cast a vote by June 1st with the winner being selected later that month.

This year's event will also include a family-friendly camping area as well as a family-focused Sunday and Teen Scene, which includes interactive programming and a "School of Rock Teen Vibes Stage," with musical instruction and jam sessions with Main Stage artists. – CelebrityAccess Staff Writers