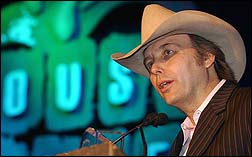 “This year’s class includes some of the most recognizable music artists in the world,” according to the Hall of Fame. “The ceremony in February 2008 will feature performances by this year’s class as well as some of this state’s greatest music achievers.”

The 2008 Class is the fourth class of inductees for the Kentucky Music Hall of Fame which was created in 2002 and holds an induction ceremony every two years. The 2008 Induction Ceremony will be held in the Lexington Center Bluegrass Ballroom in Lexington on February 21, 2008.