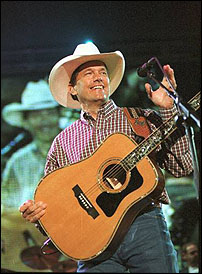 On February 11 George Strait will release For the Last Time – Live From the Astrodome (MCA Nashville), his first live disc ever. The 16-song collection, recorded on the closing night of the "Houston Livestock Show and Rodeo" on March 3, contains some of Strait's biggest hits like "Amarillo By Morning" and his latest #1 single, "She'll Leave You With A Smile."

The Houston Astrodome was home to the "Houston Livestock Show and Rodeo" for the last 37 years. On its final night, Strait played to a record-breaking crowd of 68,266 people, marking the largest ticketed audience for any event held at the dome. Among those in the audience were President and Mrs. George Bush. The former President took the stage to present Strait with an award saying, "It is an honor to give this final award to the guy that deserves it the most. Everybody at the rodeo loves him, everyone in Texas loves him and everyone across this country loves his music. And I can tell you, he's just as great a guy in person as he is up here on this stage. George, well done sir."

Co-produced by Strait and long time collaborator Tony Brown, For the Last Time will mark Strait's 30th album release. Said Brown, "I have worked with George on 12 albums, and the man never fails to amaze me. He has integrity and a very keen sense of who he is musically. Working with him on his first live recording is certainly one of the milestones of my career."

From the stage that evening and caught on tape for the disc, Strait reminisced about the first time he played the Rodeo. "It really does seem like only yesterday when the late great Eddie Rabbitt got sick that night," said Strait. "They called me, and I'd just got in from a tour. They said,
'Can you be at the Houston Astrodome to play at the rodeo in about two hours?' and I said, 'Hmm… This has got to be a joke.' I managed to get a hold of everybody and they put us on an
airplane and flew us up here. What a night that was and it's been great ever since."

Strait will return to Houston on February 25, 2003 for the opening ceremonies of the "Houston Livestock Show and Rodeo" in its brand new home, the newly built Reliant Stadium.

Track listing "For the Last Time–Live From The Astrodome:"

1. Deep in the Heart of Texas

3. I can Still Make Cheyenne

16. The Cowboy Rides Away