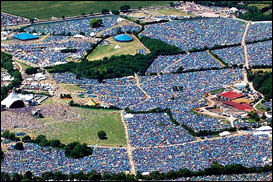 Mendip District Council said the decision was made without the need for it to be "subjected to scrutiny in a public hearing".

There was no opposition to the licence, which will run up to 2024 and will allow for more staff on site.

Dolly Parton, Blondie and Lily Allen are among acts who have confirmed they will be playing at this year`s festival, which starts on 25 June.

Organisers have said the number of public tickets available, currently 135,000, will remain the same.

Councillor Nigel Taylor said the council had worked closely with the organisers "to make this one of the best-run festivals in the world".

Mendip District Council said the few issues that had been raised had been "satisfied" and "withdrawn by the deadline", so the council "saw no reason not to grant the festival its new licence, which will run up to 2024".

Organiser Emily Eavis said the decision was "fantastic news" and it was "so good to have a plan that will help everything at Worthy Farm move forward".

Jeannette Marsh, chair of the licensing board, said the process was still one of checks and balances, adding: "We aren`t complacent – just because Glastonbury Festival now has a licence until 2024, this doesn`t mean it escapes the close scrutiny that any event this size will have… if we have any doubts about this we will take action.

"We recognise how important it is to get this world-famous event right, and the huge impact that it has on the local area and community, both positive and negative."

The festival in Somerset attracts some of the biggest names in music and past performers include Beyonce, U2 and The Rolling Stones.

Glastonbury Festival director Robert Richards said that the agreement was "an example of the same team spirit that makes the festival the success it is".