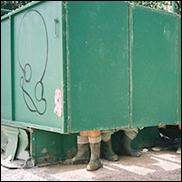 LONDON (VIP NEWS) — The organizers of Glastonbury Festival have been fined £12,000 after admitting allowing human sewage to leak from a tank and pollute a stream.

The leak happened at the Worthy Farm site in Somerset in June 2014, damaging water quality and killing fish.

However, he found that organizers had "low culpability", and praised their response and systems.

"I am still slightly amused that it has been necessary to go to this level of detail," Judge Cooper said. "I am concerned that these proceedings have set the Environment Agency somewhat against Glastonbury Festival Ltd.

He added: "I am satisfied that there was proper planning for the festival and no criticism is made of that. The Environment Agency were in an advisory capacity and signed off the sanitary facilities plan. There was a waste management plan, there was a rivers and streams management plan."

The court heard that 42 fish were killed after a "large quantity" of sewage filtered into Whitelake River.

Sensors in the stream alerted the Environment Agency to increased ammonia levels. The court was told that fish – including protected brown trout – died as a result.

Festival founder Michael Eavis told an earlier hearing in Yeovil that the sewage had been contained in a £100,000 slurry tank.