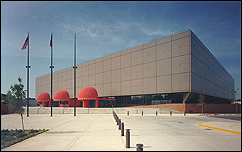 AUGUSTA, GA (Global Spectrum has been tapped to take over operations at the fiscally-challenged James Brown Arena. The change came after a unanimous vote by the Augusta-Richmond County Coliseum Authority.

The deal would provide $10,000 a month in management fees and the city will foot all the bills incurred at the arena for Global Spectrum, the Augusta Chronicle reported.

They also suggested other revenue streams that could be monetized for James Brown Arena such as enhanced ad revenue and ticketing through Global Spectrum subsidiaries Front row Marketing and New Era Tickets.

"Apparently, Global Spectrum had local ties, and I believe they will be more interested in the good of the community, and that's why I voted the way they did." Freddie Sanders, the chairman of the authority's management search committee told the Chronicle after the vote. – CelebrityAccess Staff Writers