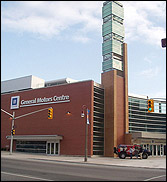 The change in management came after a vote by the city council, which decided to release Maple Leaf Sports & Entertainment (MLSE) and bring Global Spectrum aboard. MLSE had asked to be let free from their management contract in April after they reporting having lost more than $300,000 in 2007, the Durham Region reported. MLSE will be out its $150,000 management fee and their 5% share of the food & beverage concession at the centre. In return, the city will bear the burden of the reported $225,000 projected loss thus far for FY 2008.

The city is hoping Global Spectrum will put an end to the losses and what local press has described as "sluggish programming."

"I think this group has a tremendous background," Councillor Nester Pidwerbecki told News Durham. "If the best they can do is break us even I'll be the most thankful guy in Oshawa."

Global Spectrum has signed an 18-year agreement that will net them 130,000 for the balance of 2008 and then 240,000 for each subsequent year, adjusted against a consumer price index. They will be subject to monthly reporting on profit projects and subject to 25% penalties if they fail to meet quarterly expectations.

Constructed for 45 million dollars, the 5,500-seat multi-purpose arena opened for business in November 2006 and serves as the home base for the Ontario Hockey League's Oshawa Generals. – CelebrityAccess Staff Writers