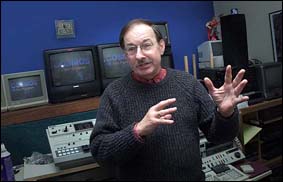 SAN FRANCISCO (CelebrityAccess MediaWire) — Punk music impresario, Dirk Dirksen, 69, who ran San Francisco's Mabuhay Gardens nightclub during its heyday in the 1970s, died Monday in his sleep, the San Francisco Chronicle reported. The cause of death was not reported.

Considered the godfather of the city's punk rock scene, Dirksen presented a who's who of punk acts in his more than 10 years of running the club. Acts included the Dead Kennedys, Devo, the Ramones, the Mutants, Black Flag and the Go-Go's.

The LA Times wrote: Mr. Dirksen, who called himself "the pope of punk," was known for peppering audiences and performers alike with abuse and insults.

"I'm sorry to see you're that easily pleased," he told the crowd at the end of one band's performance. "You should try and show some intelligence and sophistication and not just accept any slop that's thrown in your trough."

He turned to the musicians, who were trying to stalk off the stage, thinking he was not going to let the band have an encore.

"I'll give you one," he said, "but only because the next group is an absolute pimple in the armpit of progress. Now everybody, please pay attention because it's time to play 'People Are Stupid.' "

"He was super obnoxious onstage," said Penelope Houston of the Avengers. "He would stand there with that little dog under his arm, being a target for whatever they wanted to throw. At the same time, he loved all those people. In a way, they were his family."

The dog's name was Dummy.

Mr. Dirksen once estimated that his nose had been broken seven times during his years as a nightclub impresario.

Among the highlights of the Mabuhay's annual calendar was always his birthday celebration, where each year he dreamed up a different mock torture for himself — flogging, beheading, etc. One year he had himself burned at the stake.

After leaving the club business in the early 1980s, Dirksen operated a video production firm.

According to the Chronicle, Dirksen was born in Braunschwig, Germany, in 1937. His family moved to Southern California after World War II and settled in Downey.

Dirksen served in the Army and briefly attended San Jose State before dropping out to open a surfing business in Santa Cruz.

He found his way into the entertainment business as a tour manager for Ray Charles, the Supremes and Iron Butterfly, the Chronicle said.