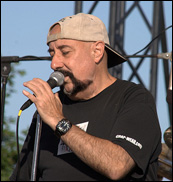 Marchello was a founding member of Good Rats, which formed in 1964 under the name the U-Men, but switched names to the Good Rats ahead of the release of their eponymously-named LP in 1969. The group continued to perform around northeast through the 1970s, building a cult-like following and performing at venues including Madison Square Garden, The Nassau Coliseum and Hammersmith Odeon (now Apollo) in London, England before breaking up in 1983.

Marchello and his sons Gene Marchello and Stefan Marchello reformed the band in the mid 1990s and released three new studio CDs with this lineup, Tasty Seconds (1996), Let's Have Another Beer (2000), and Play Dum (2002) which proved to be a hit with the band's fans.

In 2008, the band was inducted into the Long Island Music Hall of Fame and the band continued to perform live annually at Manhattan's B.B. King's and at "The Crazy Donkey" in Long Island.

In a statement published on publicist and family friend Clifford Meth's blog, he wrote: “Peppi’s life was about his family and his music, His love for songwriting and performing never diminished and he continued playing as many as 100 times each year until the very end. He was adored by his legion of fans who regarded Peppi himself as an event they wanted to be part of. He will be dearly missed.”

“My father was a blue collar rocker,” Marchello's son Stefan added in the statement. “His funeral will be open to his fans—that’s exactly what he would have wanted.”

Peppi was survived by his mother Yolanda (88), his wife Cathy, his children Gene, Stefan, Kristin and Spencer, and eight grandchildren, as well as his sister Vivian and brother Mickey. – CelebrityAccess Staff Writers